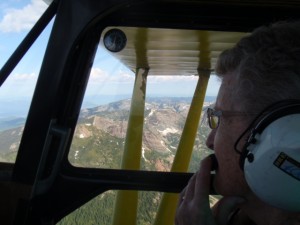 Mom’s birthday flight over the Scotchman Peaks on her 84th birthday.

Comes a time in many lives when we find ourselves orphaned. Some of us — most of us — are blessed with waiting until we are well-grown when that happens, which might make it somewhat easier, but might not. In our case, it was a combination.
We lost our dad in 1986. It was a long and drawn-out affair, and no fun for anyone. Now, we have lost our mother. It was simple, sweet and to the point. Mom left a short week after she was notified she would be leaving shortly.
She wasn’t necessarily happy about that. At some moments, she was downright angry; at least once because it was coming on so quickly, and at least once because it was taking so long.

She asked to be at home, and we saw to it that she was. She gave us a short list of music for her memorial service, banning “In The Garden” in favor of “I’ll Fly Away.” She at one point yelled at my sister, who’s only sin was doing a yeoman’s job of taking care of her, and did until the very end.
In that end, we couldn’t know how she was feeling, because she lost her ability to communicate. But, we didn’t lose the ability to communicate with her. There is an idea that the last sense to fail is hearing. Each of her close family told her goodbye in their own way, and some of her friends as well. Once all her children were gathered, as well as grandchildren and great grandchildren, she took her leave. But not before we had a family concert in her bedroom.
She has, by a few simple acts, made her transition easier for all of us. First, she prepaid her undertaking expenses years ago. It’s worth every penny. Second, she divested herself of all her real property. This means we don’t have to go through a probate process. Third, she wrote out a list of family members and the important personal items each is to have. This means we don’t have to argue about Bessie Loman’s paintings or the piano.
I don’t think I knew my mother as well as some of her friends did. She was in some ways, the “strong silent type.” However, she and I had some spectacular fights about important things, matters of will and “who’s-in-charge-here.” And at least one melt-down about nothing brought on by too much time in the same automobile on each of the long road-trips we undertook together.
One of the nicest things my mother said to me was, “I love you, but sometimes I don’t like you very much.” That might seem harsh, but it was also completely honest; and it showed me that she trusted me enough to tell me the truth. It was after one of our big battles about important things, and I think it was the last one we had. And, in the end, we found that we liked each other just fine.
I have a theory that we don’t become truly adult until we settle with our parents. It’s probably not my theory, really, but I have adopted it. What I mean by that is that we have accepted our parents for who they are, and have stopped modifying our behavior to please them — or to manipulate them in any way. We have forgiven them their mistakes and hopefully asked their forgiveness for ours. We have cast off any reins of control they might once have exerted over us. When this happens, if we’re lucky, it’s opportunity to have a deeper relationship with each other. If we’re extra lucky, we and they get to fully recognize that we are great blessings to each other.
I think we have achieved that.
One of my favorite family pictures shows out mother in a chair with all of her children and grandchildren standing around her. We are all looking at the camera, we all have our eyes open, and we are all smiling to one extent or another; some more than others, but still smiling. Not a one of us is leaning on another. We are standing erect and squarely on our own two feet. That is our mother’s greatest gift to us.
Some of my friends are amazed that we all seem to be “taking it so well.” Well, me too. But I’m not unhappy about that. We will miss her, but by making this dying process completely transparent, we are also able to do the processing. Even the little great-grandkids were welcome in the room with her as she faded away. Death of the sort my mother experienced, and us with her, is not something we need to hide or hide from. It is a final step and a first step. There is nothing to fear.

← God’s Will and Testament
The Girl Who Needed Glasses →