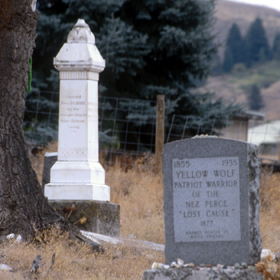 “He was not a war chief, you know. Some things they say he did, he didn’t do.”
— Marguerite, who introduced me to Thunder-Rolling-in-the-Mountains

It’s a long way from Las Vegas, Nevada, to Nespelem, Washington, in the hilly scrub and sage country north of Grand Coulee Dam — a long way and a long time. But I’m reminded of the tale that Saint Paul spent a dozen years in Egypt after being blinded on the road to Damascus and then given back his sight. Like Paul, I’m still processing my conversion, if it can be called that. In the meantime, though I am still cognizant of the process, other things have gained my attention.

Here in Nespelem is a cemetery on a hill at the north edge of town, full of dry weeds and dusty walkways between the graves. Some of the graves have markers. Many do not. The custom of those who have friends or family buried here is to heap and surround the graves with the river cobbles that the ground is full of. There are many unmarked mounds. Some have nearly disappeared. There are many small mounds — child-sized. This is the cemetery for the Nez Perce people who have lived and died on the Colville Indian Reservation.

I’m here on September 21, first day of autumn and anniversary of the death of the most famous occupant of the cemetery. His name was Thunder-Traveling-to- Loftier-Heights or Thunder-Rolling-in-the-Mountains. The woman who first took me to his grave told me his name in his own language. She laughed without rancor as she told me I would never be able to pronounce it as she could. “Thousand of years of genetics, you know.” It was something she held as a talisman — evidence that her blood gave her something I could not have. She was half Lake Indian, half white, part of the Confederated Tribes of the Colville Reservation.

We know Thunder-Rolling-in-the-Mountains as Chief Joseph. We don’t know him well, try as we might. In memory, we have turned him into something he was not. The sign on the highway at Nespelem, a place that should know better, doesn’t tell the truth about Thunder-Rolling-in-the-Mountains. Even the Agency police don’t seem to know him. When I first came here inquiring several years ago they sent me to the wrong cemetery.

That is where I met Marguerite, the old woman who showed me to Joseph’s grave. It was Memorial Day Sunday, and she was at the Catholic Cemetery to pay respect to her family. Her husband had hurt his back, and she asked me to carry things out to the graves while he waited in the car. She handed me a plastic grocery bag full of plastic flowers and a long-handled hoe-like contraption and led me through tall, dry grasses and rows of headstones to the far end of the graveyard. As we went, she addressed people buried there as if they were sitting on the markers watching us go by.

When we reached her parents’ graves, she knelt between them facing their heads and conversed with them as she made ready to place the decorations. Out of the big, fabric bag she carried, she produced a trowel and dug holes in which to set the wire holders of the plastic wreaths. As I handed her the flowers, I asked what the device I carried was for. She said, calm as you please, “That’s for the snakes,” and then she laughed at my surprise. That’s when I fell in love with her, 80 years old and all.

Marguerite had gone to the Indian school at Fort Spokane, where they took away her Native culture, and then to live with nuns and “complete her education,” as she put it. Somewhere, somehow, she had reclaimed her Native half and she told me dispassionately
how her tribe was split in two by the Medicine Line, the U.S.-Canadian border. The Lakes were migratory before the two governments began restricting free passage. They were finally forced to choose at which end of their traditional grounds they would live. Half chose Canada. Half chose the U.S. This is how it is still — families split, ties dwindling over the decades.

Together, she and her husband were both teachers on the Reservation when they were younger. They escorted me back to the Nez Perce cemetery. Then she took me by the arm and led me to Thunder-Rolling-in-the-Mountains’ grave; told me his name as if it were an introduction.

“He was not a war chief, you know,” she said. “Some things they say he did, he didn’t do.” Then they left me here alone.

I am most often alone in these places. Today, the Indian boy pushing his bicycle up the hill near the gate when I drove up disappeared immediately, but two golden eagles circle in the air out above the little Nespelem River. I watch them for a while, thinking of what has brought me here, the path entered into in the Nevada desert years ago.

It’s been a long path and a long time, but time doesn’t mean much in this country — the West. The sequence of events is important, but only in some ways. The logical left side of our brain, for instance, is helpless without a point of reference from which to proceed. The right side couldn’t care less. For the right brain, the part of us that lives in the What Is, it is not when or why a thing happens that’s important, but simply that it does. I struggle to live in the What Is.

I have been to Nespelem twice a year since Marguerite brought me here and introduced me to Thunder-Rolling-in-the-Mountains. Today, I’m here to pay my respects and see and feel the place once more. Not much is changed, excepting that there’s a new fence of treated lodgepole and metal posts and stout, heavy-gauge field wire. The wind brings the fence gifts of tumbleweed and empty 12-pack boxes.

A well-used trail leads through the other graves to Joseph’s, but before I visit Thunder-Rolling-in-the-Mountains, I go to the grave of Yellow Wolf, a warrior buried here. He is not the only warrior. Military headstones mark the upper ranks of the dead on this hillside, but this man is a warrior among warriors. He fought the entire War of 1877 and lived to tell his whole story as an old man. He’s an old war dog, buried nearly at Joseph’s feet.

On his grave and headstone are pennies, foreign coins, an amethyst crystal, a magnificent garnet and a single .45 caliber pistol cartridge. I lay my notebook on his headstone and the wind opens it for me, right to the first blank page. That is how it is for me in these places. That is how It Is. I pick the notebook up and begin to make notes, capturing the moment so I can play fast and loose with time later on — when the real work and joy of all this comes together — sitting at a series of desks with a variety of views between now and when this book will be done.

From my vantage point now, the white marble obelisk that marks Thunder- Rolling-in-the-Mountains’ grave is lined against the sky of a beautiful early autumn day. Sounds carry uphill from Nespelem — chickens, dogs, children. Somewhere to the south, a coach with a whistle is running a team through its paces.

Others have been to visit Thunder-Rolling-in-the-Mountains today. Four fresh and perfect apples lay on the compass points around his monument. Flowers, coins, shells, ribbons, tobacco, rocks, crystals, a single-spike deer antler, blue jay feathers, a small compact mirror, a cartridge matching the one on Yellow Wolf ’s grave and a stone decorated with a symbol I don’t recognize lie on the ledges of marble, on the broken white quartz that covers the grave, on the two-by-fours set into the ground that define the boundaries of the plot.

The old, broken-down elm planted at Joseph’s feet sports neckerchiefs, a miniature dream catcher, a house key stuck into a crack where a big limb has been pruned away, a beautiful opalescent shawl that has not had time to fade or fray, ribbons, feathers, and a child’s toy — a plastic egg that opens to reveal Babar the elephant and a friend in a scene that moves, wound by the closing of the lid.

What motivated the generosity that led a child to leave such a thing? Or was it left — as many of the toys and pinwheels and plastic flowers in this place were — by a grieving parent?

These things, these gifts for the dead, I have seen in many places besides here. The Big Hole. The Bear Paw. Wallowa Lake. Pilgrims bring them. A favorite one seems to be a single earring, as if the wearer wants to give one and still have one to be reminded of the giving. It is a good gift, I think.

At White Bird Canyon over in Idaho, where the War of 1877 and Thunder- Rolling-in-the-Mountains’ notoriety officially began, there are two hills within the legally defined limits of the battlefield. On top of one is a pit within a circle of stones which I suspect is ceremonial, for the battle site is a holy place. Things are left there by visitors: stones, bones, tobacco, feathers, ribbons. I left a business card there once in hopes that someone would call me and tell me secrets about the place, traded it for a piece of obsidian that was there, a shiny chunk of volcanic glass. It had its secrets, too, and would gain a few more in the time that it stayed in my possession. No one picked up my card and called. I’m having to ferret the secrets out for myself. Present tense. It’s a project to last me the rest of my life, for secrets have piled up in the layers of lava that have flowed across the place over the millennia, blown in on the north wind with the rich loess off the Palouse and washed down and settled in pools under the cottonwoods in White Bird Creek.

And that’s what it is like to explore the other aspects of this story. The secrets are piled up in layers years deep and decades wide. I seem to travel in circles chasing them and time was when I thought I was just spinning my wheels, but these days, more and more, I see that I’m rolling along in the right direction.

I have gifts myself today for these two men buried at Nespelem — the jawbone of a young bear for Yellow Wolf, red-shafted flicker feathers tied up in a tuft of bison hair for Thunder-Rolling-in-the-Mountains — and the black amulet. The amulet will be hard to leave behind. It’s been a precious part of my life. It’s not really a gift, anyway, but something Joseph gave to me that I think it’s time to return. I will remember the amulet. Other things I leave today, I’ll have to be reminded of somehow.

That’s what the notebook is for, and there are days when I wish I could throw it away, forget all this and just live a life that does not entail recording or researching or revealing or reliving. It is a demanding thing, this notebook, and now it even seems to be in cahoots with the wind.