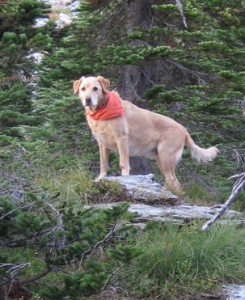 There’s a snowshoe hare living somewhere around my yard. I see her (him?) almost every day. Medium brown. Medium sized. Medium-length ears. Extra fast. Most often, I see it when I come home from somewhere, sitting sentinel in the yard. As soon as I drive in, it blitzes off into the brush.

GC — my dog — has either not noticed it yet, has bunny blindness, or (this is really a funny thought) has finally learned not to chase things. Yeah, right.

Just the other day, as GC and I plodded into the last couple of miles of an 11-mile adventure, he suddenly took a hard left and went blasting up the hill after something I’m not sure what. The next thing out of my mouth was “NOOOOO!” The fact that he had that much energy left was astounding, and miraculously, he stopped. And looked over his left shoulder at me with that, “C’mon, boss. Let’s have some fun!” look. Then, at my insistence, he returned reluctantly to the trail and we plodded on. It might have been a squirrel, which he can never catch anyway, but I could smell elk.

GC stands for Golden Canine, which is my dog’s Facebook name. Sure, go ahead and “friend” him. He doesn’t get online often, so be patient if he doesn’t accept your request right away.

GC’s real dog name is Laddie, and Laddie has become, over the past few years, a great dog. This can be translated to mean, in human language, “friendly, happy, ready to rock — and somewhat obedient and loyal.” In actuality, GC has always been a great dog, even before achieving human dog standard near compliance. I say “near,” because GC is possessed of a mind of his own — and a nose that never quits.

Right now, he’s outside my window, nose in the air, sniffing away. Dogs have good noses, but his seems to be a super-nose. It gets him in trouble from time to time. His sense of smell is much keener than his sense of hearing, or so he says —by his actions. Even though he does know what “NOOOO!” means, GC sometimes still forgets what “Here, Laddie,” means.

If I were to give GC a new dog name — which I won’t — it would be “Ranger.” On trail, he ranges ahead, out front and often out of sight. But, every few minutes, I look up and he’s sitting in the trail waiting. When he sees that I’m still coming along in my slow two-legged way, he goes on ahead.

When we hike off trail together, and he doesn’t have his pack on, he ranges out to one side or the other, again often out of sight, but it seems just out of sight. If I give out with our secret whistle, he nearly immediately shows himself, as if to say, “No worries, boss. Here I am.” Then, it’s back to whatever semi-parallel line he might be following.

I used to worry about that, but over the past couple of years, he has proven himself very trustworthy when it comes to keeping up with where I am, even though I can’t keep up with him. The advantages of four-foot drive are tremendous.

He’s also got a tremendous nose for trails. Even when they sometimes disappear to my human senses, he finds and follows them. We were up high in a ten-year-old burn on our 11-mile adventure, and a decade of sunlight where once there was shade has caused the beargrass and low-bush whortleberry to obscure much of the trail tread. Follow the wagging tail was all I had to do to stay on track.

Later, we whacked our way out to a view of the place I wanted to get to from the top of a cliff that kept us from getting there. En route, he once again showed his good sense by staying on top of the ridge while I tried to shorten up the route by traversing side hills. You’d think I would know better after the however many decades of hiking the Cabinets of which I am guilty. My dog does.

On our way back to the trail, I let him lead.

GC is — or has become — a dandy. Our relationship hasn’t always been so great. The teenage dog years were a trial for both of us. He’s just beginning to understand the concept of personal space. Just beginning to learn that not everybody loves dogs. He hardly whines at all any more in the back seat. He comes — most of the time — when I call him. He seems to have accepted the fact that I, too, have a mind of my own. And that “NOOOO!” means “No.”

And, maybe, he’s learned to leave the bunnies alone.