A few thoughts about snails and cougar poop

I’ve learned over time that though I sometimes hike to get someplace, I more often hike to be someplace. This allows me to be lazy, and to stop to smell the Oregon grape blossoms if so inclined. Or ruminate on how large is the bear that left the pile of poop I didn’t quite step in.

I like to meander. Objective isn’t as important as perspective. Pushing hard for a peak is OK, but it often requires expending much extra effort. If I want to do that, I can stay home and split wood.

In pursuit of being someplace, Golden Canine and I recently wandered up an old road on the west face of Star Peak. It’s being reclaimed by the forest, though some thoughtful person keeps it user-friendly beyond the Forest Service gate by clearing blowdown and trimming back young trees encroaching on the prism. It was constructed for logging so long ago that the ensuing scars have all but disappeared. Holes in the roadbed reveal where stumps left in the fill have rotted out. Mysterious spur roads lead off, attractive enough to explore next time we venture in that direction.

Bits of life and death decorate the tread. Shards of hide and bits of white fluff mark where a snowshoe hare was consumed by something hungry. The list of suspects is short but impressive. A colony of ants confidently builds a residence in the center of the path, as if to say, “What bear?” Shooting stars in profusion cast a purple haze in a sunny spot above the road cut. A range cow’s prodigious bones lie disbursed along the edge of the fill. Critters that benefited by its demise are many and diverse, and the neighbor who lost the steer takes such things in stride. He’s a live-and-let-live kind of guy.

A pileated woodpecker shies into the dark woods below the fill. Golden Canine finds a deer femur to chew on while I consume a single, incredibly tasty glacier lily. A raven throws its dancing shadow across our path. Three nice morels end up in my pack. Arrowleaf balsamroot and Indian paintbrush conduct their annual spring beauty contest, which is always a tie. Cougar scat full of whitetail deer hair and fragments of bones of the same lie bleaching in the sun at irregular intervals. Far from the other remains of the snowshoe hare, I find a single, perfectly intact rear foot, complete with incredibly soft fur and four diminutive claws. It goes into my pocket.

The singularly most intriguing thing I found, though, I might have missed if I had been focused on a summit instead of what I might find at my feet. I almost did miss it, but something in my mind said “What was that?” I went back a few paces to see. “That” was a snail.

I appreciate snails. They remind me that some things just take time. We can hurry and worry and push and pull, trying to make things happen — faster! But in many things, only time and steady effort make a difference.

This snail seemed to have something to say. It was perched on one of the mountain lion’s decaying scat; looking all territorial; eyestalks and neck stretched out as if to say, “Mine!”

OK, snail. Whatever. You can have it. I have my lucky snowshoe hare’s foot and three morels to show for the day, and whatever attraction you have to mountain lion scat and contents thereof, I do not share.

Later, though, I think about the cosmic significance of a snail standing guard on mountain lion scat; one of Creation’s slowest creatures sitting atop the leavings of one of its fastest, containing the remains of another almost as fast — but not quite. And here I am with a snowshoe paw in my pocket. Maybe it’s a variation on the tale of the tortoise and the hare.

I could conjecture about that for a long time, if I wished, but I think I’ll just go home and sauté the morels. It’s enough that I was led to notice and given a moment just to be somewhere. 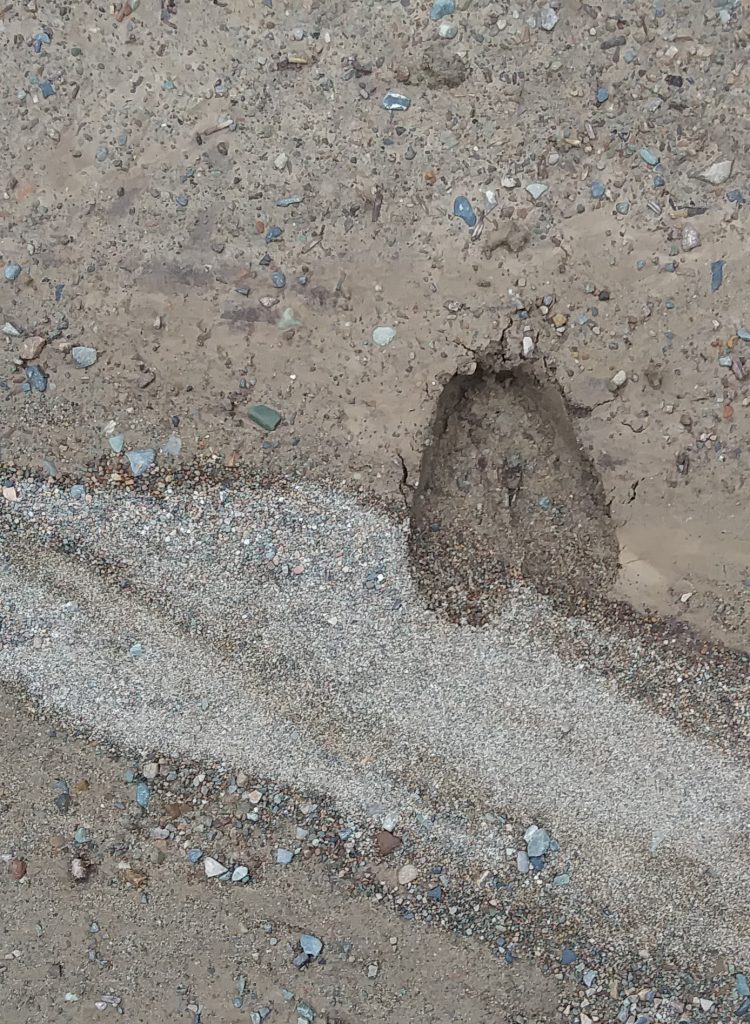 When meandering, a single, well-placed deer track is enough to give a hiker pause. 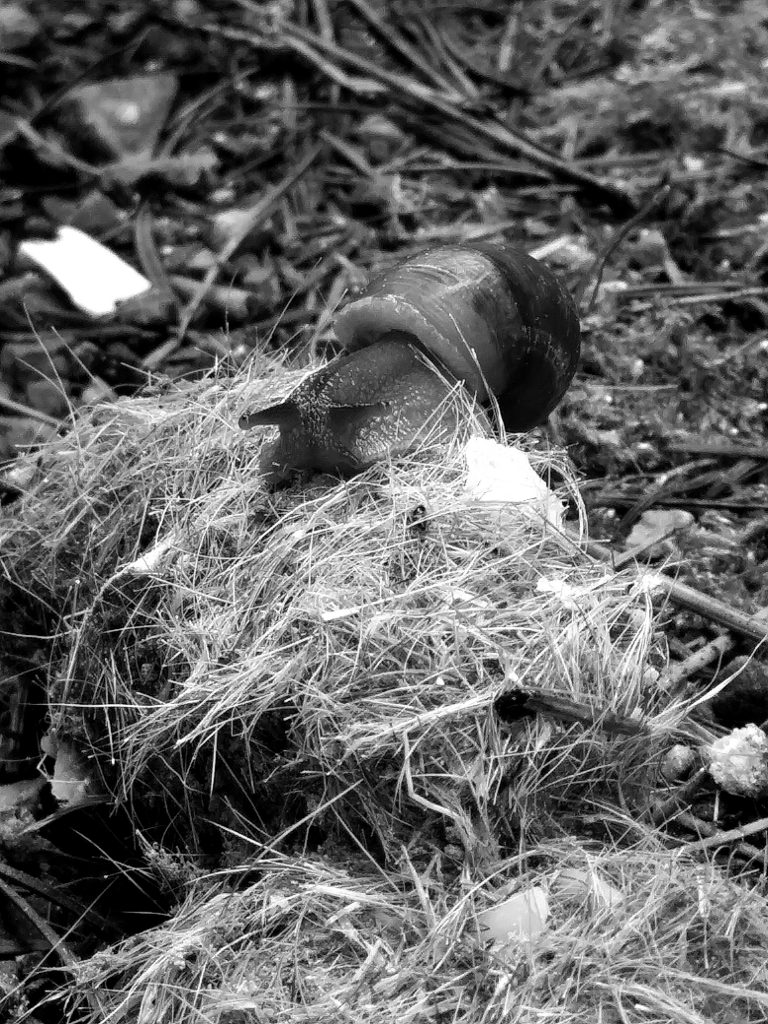 The extended eyestalks and neck of this snail seem to say, “My cougar scat!” 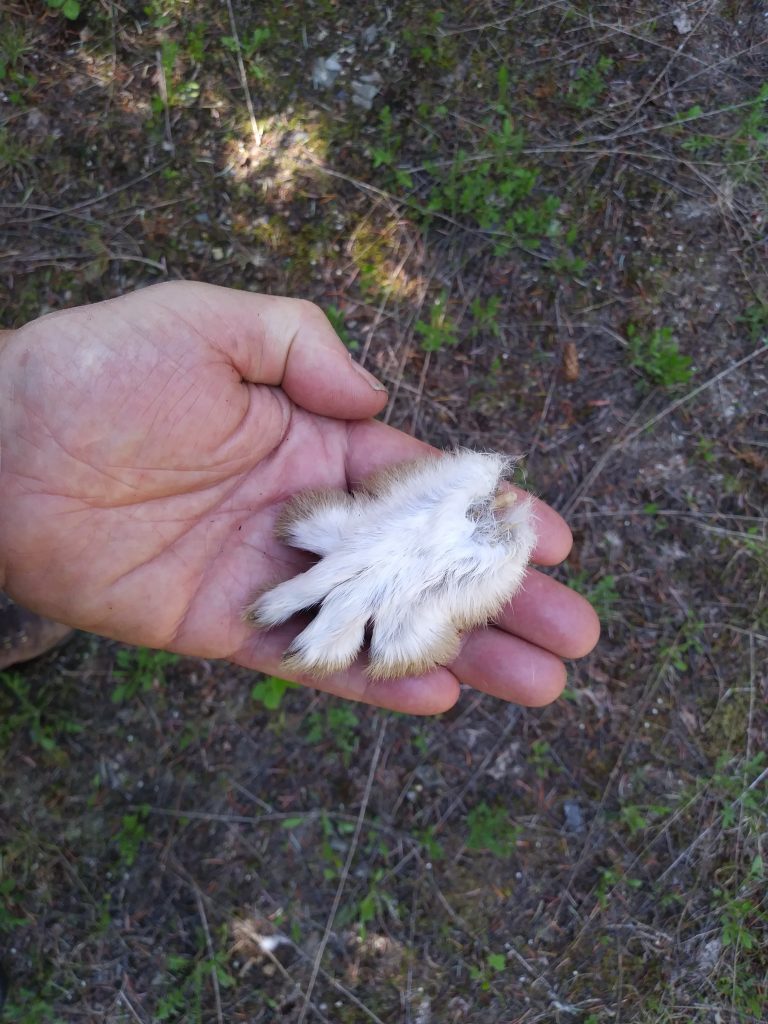 . . . a single, perfectly intact rear foot, complete with incredibly soft fur and four diminutive claws. It goes into my pocket. 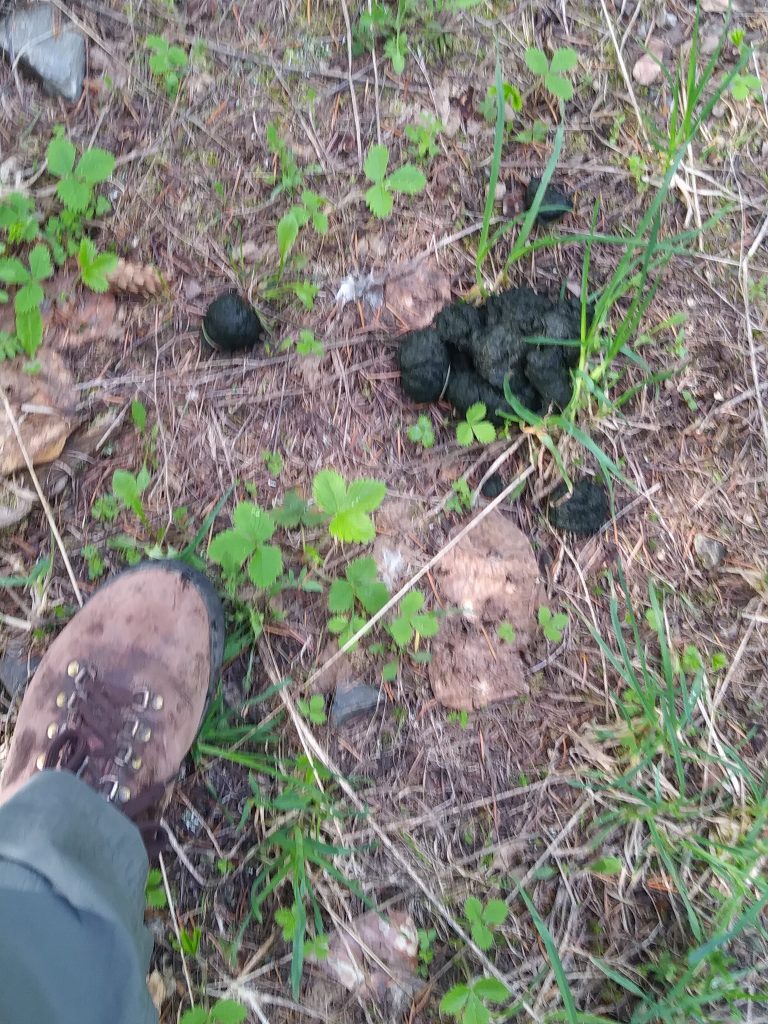 The pile of bear poop unstepped in.