The Blessings of Retirement

Retirement means, of course, launching full-tilt into the rest of life, set to do all the things we have been wanting to do, but lacked the long, connected strings of time to do them. Maybe not everyone feels that way, but that’s how I feel, even though the world decided to shut down to commemorate my first monthly Social Security check.

Nonetheless, there’s nothing like a chainsaw, a splitting axe and some old-fashioned salvage logging and wood-cutting to facilitate social distancing — it seems nobody wants to help, anyway. So, most of the month of April was spent getting reacquainted with my old friend Manual Labor. He’s a good buddy, and we’ve gotten a lot done in the past, but I can only take so much of him at a time. Manny’s someone you have to get used to. Sort of like me, I guess.

Still, I was feeling good when Aaron Harris brought his portable sawmill to cut up the logs I salvaged, and I signed on as his swamper and advisor. He really needed neither, but he was gracious enough not to charge me extra for it. I survived 3 days of pulling slabs and stacking lumber. Then I was handed a 36-hour sentence in or near a bathroom during which I lost 7 pounds. (Every cloud has a silver lining, right?) 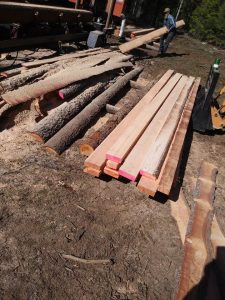 Of course, the first question to consider while so sequestered was “Do I have it?”, “it” being Covid 19. After two days of somewhat severe worry and physical aggravation, I am pleased to say this morning that I don’t believe I do. Food and coffee are once again appealing. I am not only hungry, but highly relieved. It seems to have been a combination of “somethin’ I et” and physical exhaustion. Last week, after all, was National Overdo It Outdoors Week at my place.

That first question, though, made me reckon how much the invisible threat of the virus is telling on me, as it is on many others. Also, I realized how much more real it is for folks not living here or someplace like here. At least, we can get out and play golf, ride our bikes, take a hike, take the dog for a walk. Simple, mundane, yet incredibly important things.

I only know personally two someones who’ve had the disease. They both survived it. They live elsewhere and were infected by a visitor from afar. I have no other real experience of it, no close friends or relatives who have died or are in danger of doing so. Considering the situation in big cities and international hot spots — and Blaine County — I say, “Thank you, Grandma and Grandpa, for settling here in Montaho.”

Still, it’s disturbing to see that some folks are not getting it — the idea of prevention, not the disease. Right here in Montaho are places where folks are still standing or sitting elbow to elbow in situations where one good sneeze could infect half a small town. Either they don’t care or they believe they are bullet proof.

This makes me a bit more paranoid than I might be. I don’t stand or sit with them, or go to places where I see that sort of action, but I have to wonder who I might know who has or will. And, if they’re chasing their recreational beverages with a shot of Lysol.

I had a dream last night in which two high school classmates approached me, one of whom was evidently ill. His companion said, “He has it. He’s just out having a last look around.”

“He” said, “Nice to see you,” reached out and patted me on the shoulder. Then they casually walked away. The first thing that occurred to me was that I was going to spend the next 14 days in isolation. I was both frightened and enraged. Then I woke up — to gratitude and relief.

I read stories from around the planet that make me cry and acknowledge how absolutely blessed we are to live here and now, but I also need to remind myself and anyone who might read this that we aren’t bulletproof. And we need to care — for ourselves and others. It’s wearing and trying and scary and screwed up, but it is what is. We are blessed, for sure, but let’s try to not screw up the blessing.

So, on this beautiful, sunny Montaho morning, I’m going to fix myself another cup of coffee, eat a piece of chocolate cake for breakfast — I’m retired, you know —  and edit this piece into submission. Then, I’m going to take Golden Canine and his tennis ball down to the river for a swim. As I go, I will thank the Spirit for where I live and all the other mundane, incredibly special blessings of the day.
This was cross-posted from the Sandpoint Reader. Please consider donating to our local publication during this difficult time.