Surviving the Mother of All Overscheduled Weekends . . . and watering trees 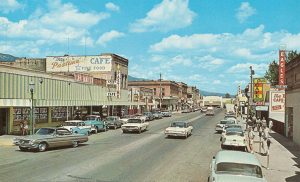 NOT the Mother of All Overscheduled Weekends in Sandpoint.

Sandpoint, the nominal capitol of the vague state of Montaho was VERY busy last weekend. Hundreds of folks from as far away as Athol — heck, maybe even Spokane — strolled the streets with melting huckleberry ice cream running down their arms, because it was also hotter than a firecracker. I probably shouldn’t even say “firecracker.” We’ve been smelling smoke for so long it doesn’t smell like smoke any more. Fire danger is extreme.

Let’s pretend one couple went to them all — not including yard sales — starting with the county fair on Thursday and ending with the music festival Grand Finale on Sunday. That’s 1232 miles on the Prius, and $1375 on tickets, gasoline, cappuccinos, chili cheese dogs, a little log table with imbedded rock top that weighs 110 pounds (perfect for the entry hall), two dream catchers for a niece and nephew, fried chicken dinner to go, 10 chances to win a Winchester 12-guage pump shotgun (they didn’t), ten chances to win a lovely hand-made quilt (they still didn’t) three huckleberry milk shakes, a number of inferior hamburgers, a jar of pickled garlic, some excellent curry, bad coffee, a very nice bottle of red wine, two six-packs of local beer, four (and a few more) overpriced cocktails and a parking ticket. They slept eleven hours out of the 72 beginning at 7 am on Friday. Monday morning, they both looked five years older. And, they didn’t see one meteor.

What we did instead.

There are 16 planters on the bike bridge. The man who has watered them for the past three decades can’t any more, and he worries that the trees and other plants will die of thirst, so he called me. I’m a sucker for trees — I have hugged any number of them — so he called the right guy.

I’ve managed to water them twice so far. Not much on the scale of 30 years, but you gotta start somewhere, right? I enjoy it, really, but I won’t able to water them this week because I am meandering in the wilderness with friends until Saturday. And there are upcoming weeks that I will miss as well, because I sometimes go farther away than Athol — or even Spokane — for days at a time. So, it would be very cool if someone else — even several someones — would take a turn over the next few months.

It doesn’t take all day — only about 90 minutes — to ride a bike out there, throw a bucket with a 30-foot rope tied to it over the guardrail, pull it up and dump water caught into a planter until the planter has received about 7 gallons. Sixteen times. Easy-peasy. It’s great exercise, and your friends will beep and give you a thumbs-up if they see you out there.

In several planters, the tree looks dead, and in one, there is only a stump, but all of them have something green growing in them, so water them all.

Don’t wait for someone else to do it. Now that the Mother of All Overscheduled Weekends is over, many people should have time. If you arrive, bucket in hand, and find someone’s been there before you that day, you still get a ride on the bike bridge.

Note: Skip Pucci took watered the planters on the Long Bridge for 32 year. Next spring, we might replace the dead trees with drought resistant species and set up a volunteer watering schedule. Write to Sandy at books@bluecreekpress.com