Regarding Surrendering: Step One 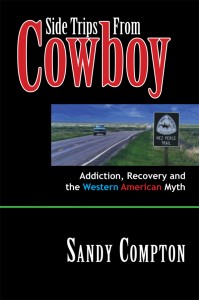 Surrender begins with Step One. When we admit our helplessness, even for a moment, we are letting go. We are surrendering something we may know not what, but it is imperative that we do.

Here is an excerpt from Side Trips from Cowboy you might find helpful as you move toward surrender.

Did you ever get on a carnival ride that promised to be fun and exciting, and then, about the time you should be staggering through the exit giggling, you notice a guy with a big belt of tools tearing apart the control box and the man who helped you load looking at the ride with a worried expression?

That was what working for the Las Vegas Sun was like — the carnival ride from Hell. The ride was fun, but too much of it would make you sick, and by the time you realized it was making you sick and was never going to stop, it was going too fast to jump off without hurting yourself. That was what our whole short life together was like for M and I.

I think M and I might have been addicted to each other. I can’t speak for M. We quit talking sometime in those crazy months, and about a month after my experience in the desert, she pushed me off the carnival ride. Sometimes I thought she did that to save me and then got too scared to jump and save herself. Sometimes I thought she pushed me off to save herself. I have finally — many years later — accepted that I will never know which it was.

The ride was going about 100 miles an hour when M calmly pried my fingers from around hers and whatever else I was holding on to and gave me a little push. Off I flew, just by centrifugal force, and I watched her whirl away smiling gaily, as if she was having a grand time; but I knew she wanted to vomit herself to death. I lay there helpless to do anything about it.

That was not bad, I would come to realize, even as painful as it was at the time. It was time for me to be helpless, because above all else, I wanted to quit gambling. And Step One is “We admitted we were helpless over the problem.”

When we are in our addiction and drowning — tumbling ’round and ’round in our own emotional ocean, caught by the undercurrents and eddies of confusion and shame — we have no idea of which end is up or which way is the shore. It is only by getting helpless, relaxing and letting the current have its way with us, that we can get our bearings. We must quit panicking, quit fighting, surrender and let God have His — uh, Her — well, Its way with us.

This is extremely frightening. It’s bad enough to be in the midst of panic and near suffocating. Now, we are expected to become still? Yes. It is a good idea, because, in our panic, we’re probably swimming in the wrong direction. We are probably swimming straight down or away from the near shore and toward some other continent thousands of miles away.

Stop. Get helpless. Let the laws of nature and your natural buoyancy bring you back to the surface. See which way the shore is. Determine which way the current is pulling you. Listen for God’s voice. Start swimming after it. In that order.

I got helpless in a rather normal way for an addict. One night I went out and lost just about every cent we had. Then I crawled home, took all the money from M’s purse and went back out. I went to a 7-11 close to where I knew a Gamblers Anonymous meeting would be that evening and played slots until five minutes before the GA meeting began, and then I went to the meeting. There was nothing else for me to do unless I wanted to kill myself, and that thought wouldn’t occur to me for months.

Once I became helpless and realized that there was nothing I could do for myself, once I gave up and went to that meeting, things began to happen quickly. God went right to work on me, even though I was not quite yet a conscious partner. That would come later.

First I had to lose a few things. It was a few days later that I took my trip to the mountains and lost my mind — and had my vision. I also lost all pride at that point, all willfulness. That’s not to say that I didn’t pick those things up again later, but for a few weeks, I simply gave up. And things came apart at the seams.

The main threads holding a full-blown addict’s life together are denial, illusion and delusion. Denial tells us that we are doing just fine, that nothing’s wrong with us. We might like to gamble (drink, shoot up, have sex with strangers, work 18 hours a day) once in a while — like all the time — but we don’t have a problem.

Illusion is what we present to the world so we can believe that it believes we are just as normal as anyone else.

Delusion convinces us that the world believes our illusion.

The three may be one in the same. In addict class — a Twelve-Step Program — it is called “stinkin’ thinkin’.”

When an addict enters a Twelve-Step Program, it’s hard to keep the threads intact. If it’s a healthy meeting group, there is a whole lot of honesty in the room; and that is hell on illusion, delusion and denial. In fact, it feels good. You can say all the stuff you have been terrified to say even to yourself about this thing that has you by the throat. You can take a deep breath after years of holding it for fear of being discovered — my, doesn’t that feel wonderful — and confess your deepest depravity, and the folks in the other chairs listen and nod understandingly. “Been there,” they say. “Done that. Got the tee-shirt. Gave the tee-shirt away. A friend bought it at a garage sale and gave it back to me.”

Trouble is, you have to listen, too. To them. To yourself. You can practically hear the threads snapping at a Twelve-Step meeting. The package you’ve wrapped yourself up in is coming undone.