In the beginning there was stone . . . 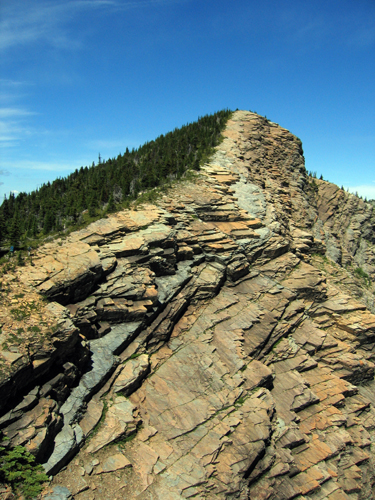 If you have never hiked into the central Scotchmans, say to Sawtooth or the Melissa Crag or Davis Point, it might be hard to imagine what the place holds for us who have — and for those who will — and why we wish to save this place.

To say this place is beautiful is a disservice to it, even though it is not a lie. Wilderness is not described by adjectives alone. In fact, the analog brain, the somewhat anal-retentive left side, has a hard time with the wild. In wilderness, there can be so much going on, and, at the same time, so little, that the left brain might take the rest of the day off in self defense and let the right brain rule the roost for a while. Then, the composite human these two reside in can just get down to the business of being . . . and seeing.

In Drawing on the Right Side of the Brain, Betty Edwards teaches that to be able to draw the world one must allow oneself to see it, and that the right brain is the “seer.” It is the part of us that detects perspective without trying to quantify it. She describes a sense of physical release and even relief when a cognitive switch is made from the left to the right lobe. In my experience, this shift always makes me laugh. It is as if a sense of joy has overtaken me. It is what some call an “ah-ha” moment.

Hiking in the midst of the Scotchmans tends to push me into the right lobe. Being becomes a way of life. Seeing becomes enlarged to include the minutia and magnutia at once and I become part of the minutia.

This combined with imagination shows me the ice, and how it overlaid the place and not-so-gently carved it into these places now harboring so much of the earth and so little of human endeavor. In these moments, it as if the skeleton of the planet is revealed, not defleshed, but to be fleshed in the coming millennia by the continuing process of the eons. Some century, trees and grass and flowers will grow out of this rock evolved to soil and some other place will be freshly upheaved and ice-sliced.

We can only guess how long this will take. No. We can’t even guess. It would be our left brain guessing, anyway, and standing in the midst of the Scotchmans or another place like it, our left brain has taken the day off, remember? We are gifted with just being, instead. And that is the only state in which we can “see” the ice. Perhaps, when we have our feet on the place we are being in and without that pesky old left brain in the way, the place can transfer its memory of itself to us.

Before the ice was the stone, and before the stone was time. Here, we stand on the stone revealed by the ice and feel time move under us. That in itself, experienced just once, is reason enough to save this place.