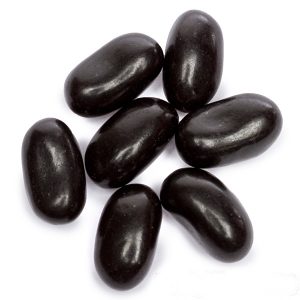 My dad loved black jellybeans; licorice flavored, I believed, but — according to some who knows — actually flavored with anise. Whatever. I love black jellybeans too, and have a supply in my candy drawer with the Toblerone chocolate and peanut M&Ms.

This evening, I made what a young friend of mine once dubbed “slimy lettuce,” a bowl of hand-torn romaine dressed with a hot concoction of chopped portabellas, bacon, tarragon, garlic, pepper, olive oil and vinegar. I often add egg to the sizzling scramble just before I pour in the vinegar that completes the dressing, but tonight, I was out of eggs.

No matter. Slimy lettuce is excellent, as evidenced by that same young man’s multiple requests for same. I have yet to grow tired of it, though I’ve had it hundreds of times over the course of my life. It’s tangy, spicy, full of interesting textures and somewhat good for you.

The greens are mutable.

Leaf lettuce, spinach, romaine, kale will work. Iceberg, not so much. For a foray into the gourmet, add a touch of cream and blue cheese to the sauce right at the end.

After this quick, easy and incredibly tasty dinner (about $3.75 food cost, $4.25 if you go for the cream and cheese), I went in search of dessert and found jellybeans, which I had forgotten I had. Nice surprise. I poured a handful onto the kitchen table, noting that there were seven.

As I ate them, I skimmed an article in Time about the Trump International Hotel in Washington, D.C., the repurposed Old Post Office Pavilion. Mr. Trump owns 76.7% of the International, and it features the only restaurant in D.C. in which he eats. For five and a half times what my dinner cost (not counting the jelly beans), you can buy a gin and tonic. That makes the $59 Kansas City strip seem almost reasonable. Almost.

Mr. Trump eats his steak with ketchup. Why does that not surprise me?

I like ketchup fine. But I agree with the Hoot Owl’s reader board sign on Idaho Hwy 200: Ketchup on your steak should affect your credit score. There are much better things to do with a steak than put ketchup on it. And better things to buy with the $23 that one of the most basic cocktails costs at Trump International Hotel.

From my viewpoint in the remote and blessed confines of Montaho, Trump International Hotel is difficult to focus on. It floats on the heat waves of a selfish subculture that thinks nothing of spending $500 of a taxpayer’s money on dinner, but is unwilling to spend a dime on healthcare and education for the middle class and poor of this country, much less the larger world.

The wealthy and powerful of the United States are hanging out at Trump International, all the while avoiding looking back in our direction. They don’t want to see me relishing my 35-cent black jellybeans while they eat their $50 Bananas Foster. They certainly don’t want to see the young woman with two kids, no husband, no job and no prospects for anything but the degrading process of entering the welfare system. Instead, they are looking for ways to defund that, and her as well.

My old man and I agree

As the last jellybean disappears, I recall something my redneck-ish liberal old man used to say when watching displays of conspicuous consumption or abuse of privilege by the wealthy on television. “Rich sons-of-bitches,” he would intone.

I have another, much less polite, term for them. Which I don’t think I’ll voice. I will instead, just agree with my dad. Rich sons-of-bitches, indeed.

← In the beginning there was stone . . .
Surviving the Mother of All Overscheduled Weekends . . . and watering trees →